Navigating an executive leadership change? Use our eBook to facilitate a smooth transition.Download Now

Planning a Life Sciences IPO in 2020? Considerations Ahead of an Election Year

Posted on May 22nd, 2019. Posted by Constantine Davides 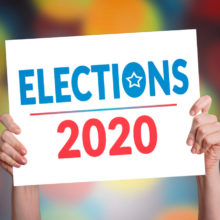 Comprised of former buy- and sell-side professionals, Westwicke’s managing directors can attest to how notoriously difficult financial markets are to predict. One area where there is at least some degree of certainty is the heightened challenge of executing a financing in the midst of an election year, where initial public offering (IPO) activity and appetite for risk tend to diminish, particularly in a politically-charged vertical such as healthcare.

Given that we often target 12 months as the optimal amount of lead-time in preparing for an IPO, any company beginning its planning today would find itself squarely in the middle of the 2020 election year by the time it had finished preparations for its IPO.

Moreover, election years have an impact on not only the quantity of IPOs, but also upon the average deal size. In an election year, the average life sciences IPO raised $70 million vs. the $103 million raised in a non-election year. This 33 percent decline in average funding is something to be mindful of but is not necessarily indicative of lower quality, as we have seen many successful companies execute their IPOs in an election year. The IPO class of 2012 included four companies – Hyperion, Tesaro, Kythera, and Durata – that were ultimately acquired for an aggregate $8.5 billion. The class of 2016 included new, novel gene therapy/editing companies, such as Avexis (acquired for $8.7 billion), Crispr Therapeutics, Intellia Therapeutics, and Editas. 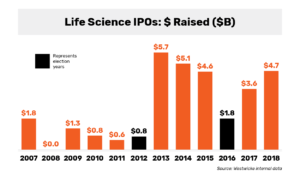 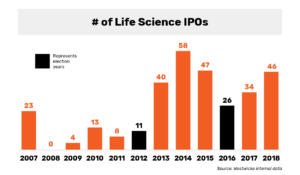 How is the Buy Side Positioning Ahead of The Upcoming Election?

We talked with several experienced buy-side healthcare investors, who discussed their positioning strategy heading into 2020.

Manager A: “I’m staying away from the service companies and anything that has to do with hospitals. I’ve mostly held onto my small and mid-cap therapeutics names, mainly because they are product- and event-driven stories, rather than psychology driven. It’s caused me to underperform a bit this year but that’s ok. If your company grows through volume and not price, I think you’re going to be ok. You don’t even see the larger players pushing price the way they used to.”

Manager B: “We think there are two reasons to remain bullish, but some reasons for caution as well. The reasons for optimism are structural. First, we are in an innovation cycle. The capital markets activity over the past 10 years has laid the groundwork for near constant innovation. Companies have moved away from developing products with a marginal benefit to curing diseases and targeting difficult to treat conditions – using transformative new technologies, such as gene therapy. The second structural reason is that we believe large pharma is increasingly looking at mergers and acquisitions (M&A) through a different lens, targeting long duration, highly innovative assets that are further outside the risk curve, rather than pursuing short-term accretion. At the same time, valuations have come a long way since Hillary’s 2015 tweet and capital markets have been fairly easy, so that makes me cautious. In addition, public enemy #1 is still the high absolute cost of drugs. I want to be underweight therapeutics as these campaigns get underway, but at the same time have enough shots on goal to participate in events and/or M&A.”

Manager C: “Our portfolio is almost entirely therapeutics. We see pressure on healthcare from both Democrats and Republicans, so we don’t really think it matters much if the Democrats are victorious in 2020. And if Trump gets re-elected, it’s not as though he is aligned with the drug companies. Honestly, we aren’t really influenced by election years – very little changes about how we position our book. We have many event-driven positions that are idiosyncratic. For our biotech analysts that are focusing on new technologies, there are still many attractive ideas out there that we will continue to look at.”

Manager D: “I think we need to stop thinking about these elections in symmetrical terms. It’s not like the past where Republicans are considered good for healthcare and Democrats are bad. There are real cost pressures regardless of the administration. Everything is skewed left. We view the risk in terms of what specific areas politicians are targeting. We think drug pricing risk remains underappreciated, especially in the Medicare Part B program. We would also worry about names with rebate exposure. I like to hide in names that should do ok under any election outcome – for example, companies with products that save lives or new curative technologies, such as gene editing and gene therapy.”

Life science companies that are interested in pursuing an IPO during the 2020 election can ensure they are optimizing their financing activities by clearly articulating the differentiated aspects of their platforms and technology and outlining their level of need for the disease states they are targeting. Get more expert advice on going public. Download our eBook: Westwicke Insider’s Guide to Going Public.

Constantine Davides is a Managing Director on Westwicke's life sciences, healthcare services, and healthcare technology teams. He has extensive sell-side, buy-side, and industry experience. He has a BA from Wesleyan University and an MBA from Carnegie Mellon. 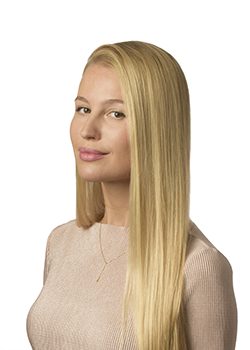 Our eBook, How to Host a Successful Investor Day,” can help you plan an effective event — either virtually or when business returns to normal.

Find out whether you should file a Form 8-K, issue a press release, or do both by using our easy-to-reference chart, Form 8K vs. Press Release: What’s the Difference?