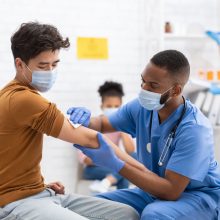 As public health officials discuss whether to call subsequent COVID-19 vaccinations “boosters,” fearing it gives the impression that previous inoculations weren’t effective—some preferred “third dose” or “final dose”—chalk it up to yet another debate about words and nomenclature related to the worst global pandemic in a century.

COVID taught us many things about public health, patient behavior, health equity and more. But it also taught health communicators about the seriousness and dire consequences of poor word choices, unfortunate correlations and the complexity of language when it comes to conveying an urgent public health message to every human being on Earth.

Let’s start at the beginning of the pandemic, where one of the very first opportunities to clearly communicate with a frightened public led to, perhaps, a misstep. In late April 2020, with rising COVID cases and the public fearful, a public-private partnership to accelerate development and manufacturing of vaccines, therapeutics and diagnostics was launched. It was called Operation Warp Speed. While it may have seemed like a good idea to highlight speed—even if named after a fictional “Star Trek” term—what wasn’t considered was how that moniker would be perceived months later when the government asked people to trust that vaccines developed at “warp speed” were safe.

I spent the better part of the past year working for a large hospital system, where I witnessed firsthand the consequential negative effects the concept of speed had on a concerned public. “The vaccines were rushed!” was the constant refrain, causing medical, government and public health experts to spend precious time and resources convincing people that the science was sound; it was just the administrative timeline that was rushed. It only partially worked and many physicians and frontline health workers loathed the Operation Warp Speed name.

Vaccine uptake was also hampered by FDA nomenclature. Not to debate the arcane world of government regulations, but “Emergency Use Authorization” doesn’t exactly elicit confidence in a life-saving vaccine. EUAs are a critical tool used by the federal government during extraordinary health crises. EUAs, and their predecessors, have been used for decades to provide critical treatments in a timely manner, from a new strain of influenza A in 1976 to the H1N1 pandemic in 2009.

But those health threats didn’t affect as many people as COVID-19 and they didn’t require every single American to take notice. Again, the name gave the impression the vaccines were rushed or otherwise weren’t safe.

Another unfortunate name was “mRNA,” or messenger ribonucleic acid. We all saw the numerous claims that these vaccines “alter our DNA.” Of course, this isn’t true, but it’s challenging to communicate highly complex scientific concepts to nonscientists. What many thought was that RNA sure did sound like DNA, so it must be true.

As communicators, we spent months explaining that mRNA simply provides the instructions for our cells to make a harmless piece of the spike protein found in COVID-19, and thus teach our bodies how to fight off COVID. But, to some, they simply couldn’t get past the name. Would this issue have risen to the surface had the vaccine technology been named something else?

On a side note, and another example of an esoteric regulatory process that’s a mystery to most Americans, is the naming of the COVID vaccines after full FDA approval. Pfizer/BioNTech chose a brand name of Comirnaty, which appears to be a combination of community, mRNA and immunity. The tortured mashup was widely panned and endlessly mocked on social media and late-night television.

Moderna went a completely different route, with plans to brand their fully approved vaccine simply as SpikeVax. It’s pithy, memorable and action-oriented. And to most Americans, will probably elicit a positive vibe. But does it really matter? I would say it does, as these vaccines are probably the most studied and familiar pharmaceuticals in the history of the world. So, Moderna saw their naming construct as an opportunity to connect with patients and Pfizer/BioNTech went a more traditional pharma route, and perhaps missed an opportunity.

The way we labeled those who weren’t vaccinated is also a public health lesson. First, calling people “hesitant” to receive the vaccine may not have been ideal. Hesitancy sounds responsible, thoughtful and even rational. Now, for some, there was good reason to be “hesitant,” such as those with severely compromised immune systems or women who are pregnant or breastfeeding, for example. But for the vast majority of those deciding not to get the COVID vaccine or delaying receiving the shot, their reason wasn’t vaccine hesitancy; it was simply vaccine “refusal.”

Across the country, medical and public health professionals debated this small yet meaningful distinction. Was “refusal” too strong? Was it judgmental? In the end, “hesitancy” seemed to be an acceptable catch-all that allowed people who had no legitimate reason not to be vaccinated to seemingly get a pass.

On the other end of the spectrum, those who refused to be vaccinated were maligned as “anti-vaxxers,” a term often associated with small but vocal groups dedicated to sowing distrust about vaccines, including some who still believe that some vaccines cause autism, a long-dispelled myth. Associating all of those who do not get a COVID vaccine with a fringe group is unfair. Some of these people cannot get vaccinated. They could be under 12 years old, or have conditions contraindicated for the current vaccines, or truly not have access to a vaccine. To demonize these people by comparing them to conspiracy theorists and carnival barkers promoting debunked scientific theories and faux claims of personal freedom isn’t helpful.

There are undoubtedly endless other terms we could analyze, and with the benefit of hindsight make other choices. This column isn’t intended to criticize, as government, public health and pharmaceutical companies were working night a day to save our lives. We owe them all a debt of gratitude. There certainly was no ill intent. Regulatory and pharmaceutical nomenclature was never created with a public health crisis in mind or to be easy to understand by the general public. And maybe that’s the problem.

In the heat of a global pandemic, with nearly 670,000 lives lost and over 41 million people contracting a deadly disease in the United States alone, the general public’s interest in this little-known world was brought to the fore like never before.

Like so many other lessons we learned from the COVID-19 pandemic—the need for better chronic disease management, bolstering our public health infrastructure, the possibilities if government and pharmaceutical companies can join forces to rapidly address other health issues, and on and on—we need to consider how language and words impact patient behavior.

We know more now than we did 19 months ago, so let’s put those learnings into practice by considering how certain words and terms will land with intended audiences. In our zeal to deliver life-saving vaccines to people, we need to ensure that our words aren’t getting in the way.

Yes, crazy as it may seem, words can save future lives.