The Market for Life Sciences IPOs: Crunching the Numbers 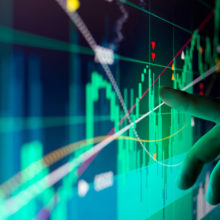 We are regularly asked to characterize the market backdrop for potential life sciences IPOs. While biotech ETF performance can offer a glimpse at current conditions, we dug deeper and analyzed recent biopharma index strength, IPO activity and follow-on offerings, among other metrics.

Our analysis indicates the market remains strong, albeit with some signs of moderation.

IPO activity remains healthy, with 16 biopharma IPOs priced YTD through May raising $1.5B on average deal value of $102M. Transactions YTD are on pace to exceed 2017’s deal count, and a disproportionate percentage of recent IPOs have priced within or above their proposed ranges.

As the luster of a successful IPO begins to fade, the reality of operating as a publicly traded company sets in. Comparing the stock performance of newly public companies relative to the sector from 2014 through May 2018, we found that, on balance, biopharma companies are doing well post-IPO.

While these time frames admittedly amount to a short lens for viewing a group that may have catalysts beyond 12 months, many investors carry investment horizons of no more than a year and constantly compare the performance of their holdings against industry benchmarks.

Follow-on public offerings may also provide an indication of company and market health. Through the end of May, biotech firms have executed 105 follow-on offerings – more than six times the number of IPOs – a pace set to exceed the level of follow-on activity each year from 2015 to 2017.

Despite some recent moderation in mid-Q2 (followed by a strong rebound in June), the biopharma market in general maintains its multi-year trend of healthy stock performance and capital-raising activity.

Publicly traded small-cap bios have performed well YTD versus the market, and IPOs generally have priced within or above their initial ranges. At the time of writing, the early 2018 IPOs, however, struggled a bit compared with biopharma three-month post-IPO performance over the last few years, and there’s deeper follow-on discounting so far this year. At the same time, we note the robust performance across a heavy flow of June IPOs.

While the market will value individual IPOs according to many factors – company leadership, clinical value proposition, potential commercial upside, time to market, competition level, differentiation –   management teams should be cognizant of the broader market dynamics that can influence the appetite for life sciences IPOs.

The Westwicke team brings more than 300 years of Wall Street experience combined to our life sciences clients. To learn more about IPOs, download our “Insider’s Guide to Going Public.” Wondering how we can best position your company for success with investors? Get in touch.

Constantine Davides is a Managing Director on Westwicke's life sciences, healthcare services, and healthcare technology teams. He has extensive sell-side, buy-side, and industry experience. He has a BA from Wesleyan University and an MBA from Carnegie Mellon.

Find out whether you should file a Form 8K, issue a press release, or do both by using our easy-to-reference chart, “Form 8K vs. Press Release: What’s the Difference?“